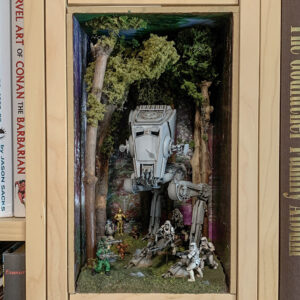 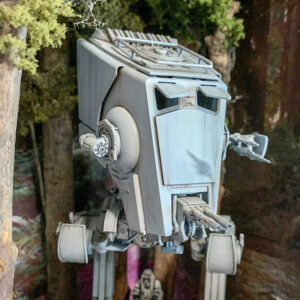 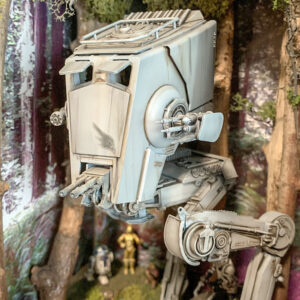 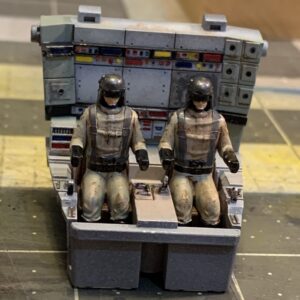 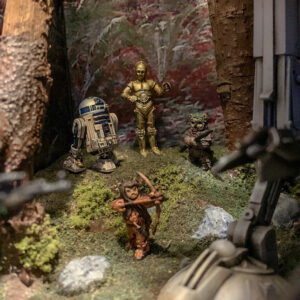 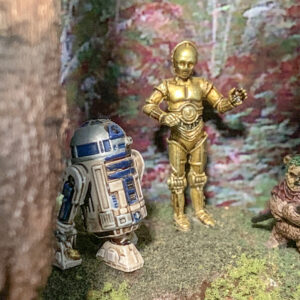 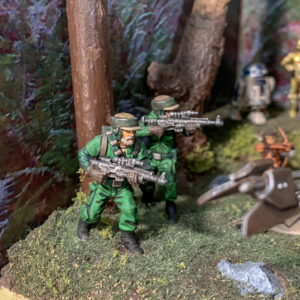 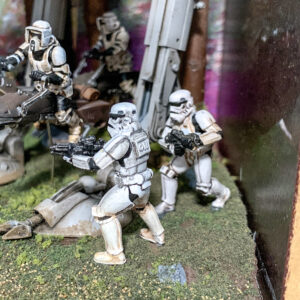 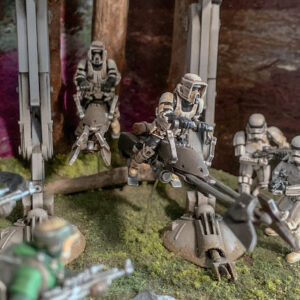 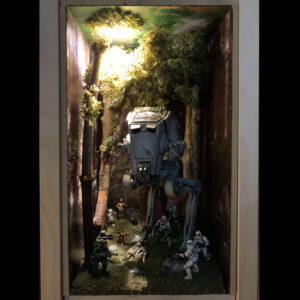 I purchased the AT-ST kit it in 2015, almost solely for the Chewbaca figure — I needed him for my Hasbro Millennium Falcon. I say “almost” because obviously I was happy to build it, but I can’t say for sure that I would have purchased it if I didn’t need that Chewie figure!

Anyway, like the Polar Lights refit Enterprise and the AT-AT, I planned to build the AT-ST when I finished the Hasbro Falcon. But that project took so long, that I felt pretty burned out at the end so I didn’t get around to building this AT-AT until 2019. It’s a fairly straightforward build — like all the other Bandai Star Wars kits, it goes together easily. I painted it gray and finished it with some oil washes to muddy it up.

Once I’d finished the kit, I put it on one of my Ikea Billy bookshelves – the narrow “media” bookcase whose name I can’t remember. And it was such a… “cozy” fit that I thought it would be cool to maybe add a background to the shelf, a forest scene for example. And it was an easy leap from there to a full-on diorama!

I built the Bandai Scout Trooper around the same time and I had been thinking of customizing a forest-themed base, which would use most of the same materials. I went to MeepleMart and bought the miniatures and some basing/diorama material (let me just say: I had no idea just how much stuff was available for this sort of work. There is so much cool shit! It’s probably a good thing I didn’t discover this earlier.) Then I grabbed some branches and rocks from the local park, and printed some forest background scenery in color to give the piece some depth.

I also invested in a bag of sculpt-a-mold, which I guess is like modelling clay, only cheaper and easier to use, it seems. It really was simple; just mix it with some water, slap it on and mold it into shape! I elevated the back part of the diorama to help with visibility and depth; then “planted” the “trees” and rocks into it while it was still drying. After, I painted it in a medium brown and added shading to the nooks and crannies.

As for the figures, these were the first gaming miniatures I’d ever painted and I did spend some time googling best techniques for miniature painting, and I did invest in some Army Painter paints and one their Quickshade washes, which made the final products even better.

Of course, no Battle of Endor scene could be complete without Ewoks. So I grabbed some Ewoks from the old Star Wars miniatures game off of eBay. These are pre-painted, and they looked good, so I just made a couple touch-ups to add some contrast.

I put the droids up on the back section, like the ridge they were on in Return of the Jedi. Then I added an LED light to the top, which, unfortunately, has since burned out (I somehow fried the power block).

Ultimately, with six soldiers, two bikes, two droids and two Ewoks, plus the Walker, it’s too crowded, but, what the heck. I’m pleased with the final result!