“What are you doing in isolation?” Mostly I’ve been answering that with “Keeping busy,” because I wasn’t ready to share this just yet… but now it’s done! This is a mobile, featuring nine Star Wars model kits that I built and painted, for my brother and sister-in-law, who just had their first child. You can see completed pics on the Death Star Mobile project page, but in this post and a few following, I’ll detail the build itself. Today, we’ll start with a little background.

It was actually my brother-in-law who put the idea in my head back in early March — “wouldn’t a mobile for the baby’s crib, with the Death Star surrounded by a bunch of X-Wings, be the coolest thing?” He knew that I built models and was obviously angling me to make one for the baby. I agreed that it would be awesome, but laughed it off and said I don’t know how one would do that — but, immediately, the wheels started turning in my head.

The first challenge was the Death Star itself. As far as I know, there had only been one full size Death Star model kit produced, by the American company AMT-Ertl, back in 1998, and re-released in 2005. I didn’t even know this model existed until early February of this year. I spotted it at BMV on Bloor (I don’t know why they suddenly had a bunch of models) and Googled it when I got home to see if it was something I’d be interested in building.

Every review of it online indicated it was one of the worst Star Wars model kits ever made. Poorly and inaccurately detailed, and perhaps more importantly, just poorly constructed: It barely fit together, and when you did get it together, it had horrible, uneven seams that, if you wanted it to look halfway decent, would require extensive filling and sanding.

So I decided not to go back to BMV and get it.

Then, three weeks later, my brother-in-law puts the idea in my head.

So, back to BMV I went, but the Death Star was gone (of course). (I did snag the 1:144 Y-Wing while I was there!) But I found one from a Canadian seller on eBay, actually selling in Canadian dollars, for the same price it was at BMV! Shipping wasn’t cheap (it’s a big ass box) but I ordered it up. 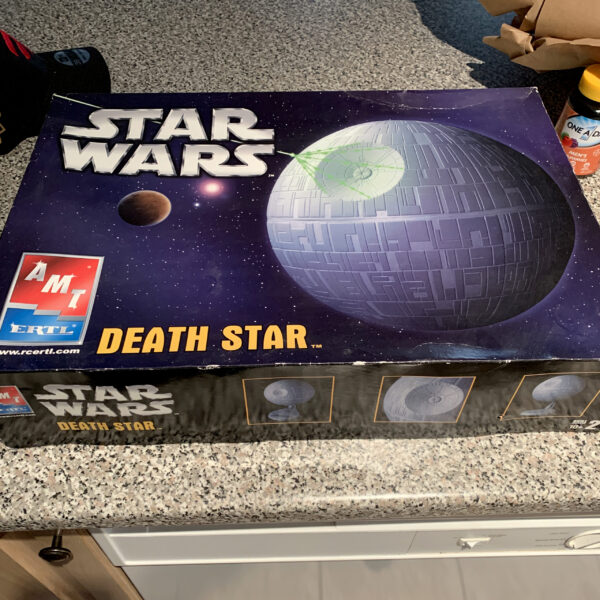 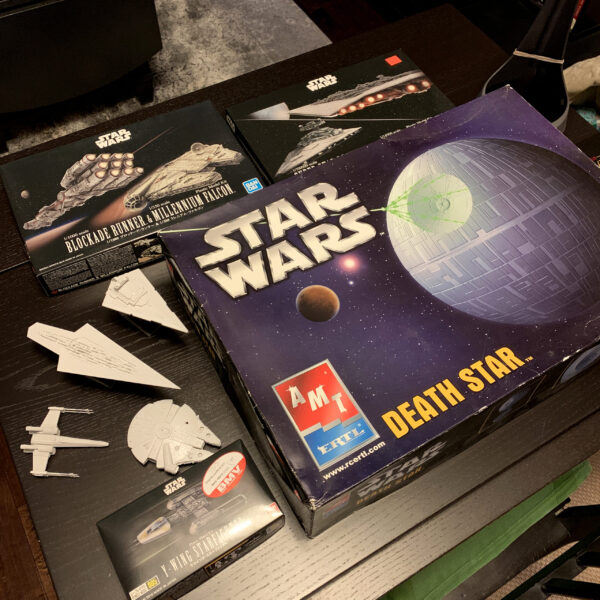 With that on the way, I set out to find the other ships. I already had a 1:144 X-Wing from the Death Star Attack Set, when I built the Death Star surface for my 1:72 Rebel Fighters display, and now I had the Y-Wing too; I looked up what other small Bandai kits were available and settled on the Star Destroyer set, the TIE Fighter set, and the Millennium Falcon/Blockade Runner set. Eight ships seemed like the right amount for the mobile!

On what would turn out to be my very last day in the office before beginning “social distancing/isolation” began, I walked over to Spadina Avenue and visited Meeplemart, where I found the Star Destroyer set, and AnimeXtreme, where I found the Falcon/Blockade Runner set. I was unable to source the TIE Fighter set locally, so I had to order that one off of eBay from Japan.

The mobile armature itself I ordered from Amazon.

And then it was time to build! I started on March 11, and the baby shower was on May 16, so that gave me about two months to complete everything.